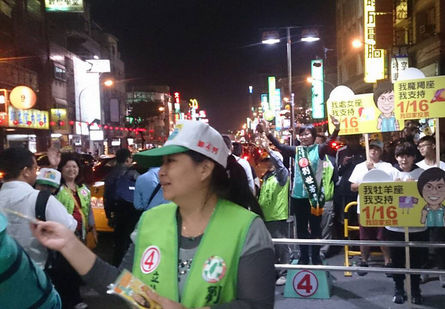 A media report entitled “Taiwan democracy hit by election chill” describes more aloof voter attitude and chiller elections in Taiwan as the country heads to the polls on Jan 16 to elect its president and legislators.

The author has interviewed a couple of voters to prove her case.

Taxi driver Xu Cong Cheng, 54, said he hasn’t voted in years, and won’t be breaking the spell on Jan 16.
Past and current elections in Taiwan have been predicated on the choice between Taiwan’s independence versus reunification with China, he said. “It’s not our call anyway, us common people. So I’m not interested.”

Times have changed and campaigning, like everything else, has gone online, said Peng Li Wen, deputy head of the ruling Kuomintang (KMT)’s communications department. “Voters today don’t decide who to vote for by looking at campaign posters. They look at what candidates can offer. It’s the whole package.”

Opinion polls show the opposition Democratic Progressive Party’s Tsai Ing-wen had built a comfortable lead at 45 per cent of the intended vote, while the ruling KMT’s Eric Chu at 16 per cent.

The big winner-loser gap is one reason for the lukewarm voter sentiment, the author quoted political analyst Dr Alexander Huang of Tamkang University as saying.

“It’s been around 20 per cent for a very long time, more than six months of consecutive polls showing who will be the winner. This kind of fact discourages voters to rally and say yes, we have a chance,” said Huang, who expects a lower voter turnout at the 2016 presidential election than the lowest ever 74 percent registered in 2012.

“I don’t think the presidential candidates can really make Taiwan better so I don’t have the desire to vote,” said 30-year-old barista Lin Huan during an interview. This will be Lin’s first opt-out after having voted at every election since he reached the voting age of 20.
Lin’s disengagement is symptomatic of an electorate frustrated and disappointed with Taiwan’s flagging economy, low wages and high housing prices, the author said.

Political fighting has also taken its toll, leading to widespread distrust in politicians and their ability to govern.