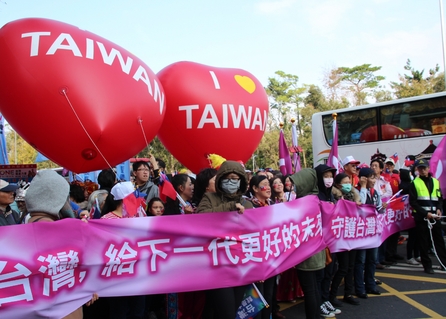 KMT marches a week ahead of election

TAIPEI (Taiwan News) – On Saturday, a week before election day, thousands of supporters of the Kuomintang took part in parades through Taipei in support of presidential candidate Eric Liluan Chu.
The list of attendees included President Ma Ying-jeou and First Lady Christine Chow, Chu himself with his wife Kao Wan-ching, vice-presidential candidate Jennifer Wang, former presidential candidate Hung Hsiu-chu and Legislative Speaker Wang Jin-pyng.
Under the slogan “Marching for Taiwan’s stability, you are the power,” three separate groups started off walking around 2 p.m. on their way to Liberty Square in front of Chiang Kai-shek Memorial Hall. The ruling party said about 100,000 people were taking part in the event.
A lot of media attention was reportedly going to the so-called “Three Sisters,” Chow, Kao and Hung, who led the group setting off from Daan Forest Park. The First Lady was shown wearing a red baseball cap with the word Taiwan written in English and a scarf with the national flag. Former Taipei City mayoral candidate Sean Lien also joined that group.
Ma and Chu appeared near the National Taiwan University campus before setting off toward the final venue under the motto “the power of hope” and lighting up a “lantern of hope” near Liberty Square.
Vice President Wu Den-yih and Wang Jin-pyng were in charge of the marchers departing from Youth Park in one of the relatively less well-off parts of the capital.
A major visual theme of the parades was the national flag, with its colors blue, red and white and the typical white sun, which also serves as the emblem of the KMT. Closing off his final live TV policy presentation Friday evening, Chu asked voters to wear a flag on their clothing when going to vote on January 16.
Pig farmers from Southern Taiwan joined in with their animals, echoing KMT accusations that Democratic Progressive Party presidential candidate Tsai Ing-wen would open up Taiwan to the import of pork with ractopamine residues from the United States if she was elected. She has consistently said that it was too early to reach a decision about the pork imports. Ma’s popularity dwindled fast after he insisted in 2012 that the import of US beef with ractopamine should be allowed.
Earlier Saturday, Chu spent the morning campaigning in Keelung with former Taipei City Mayor Hau Lung-bin, who was running for a legislative seat in the northern harbor city.