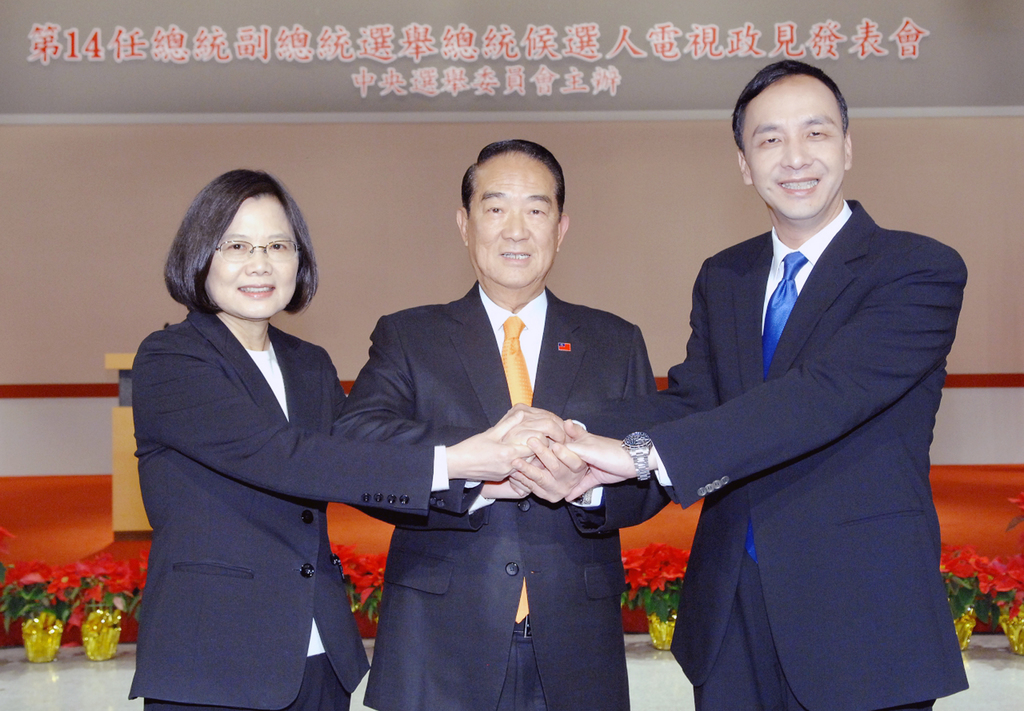 TAIPEI (Taiwan News) – Kuomintang Chairman Eric Liluan Chu called for an extra debate, while he also sparred with Democratic Progressive Party Chairwoman Tsai Ing-wen and People First Party Chairman James Soong how to deal with social housing and with youth problems during Wednesday’s second live televised presentation in the run-up to the January 16 election.
Wednesday’s event was the second time the presidential candidates had a chance to present their views, while last Sunday, December 27, they also held a debate featuring interaction and questions from social groups and from the public.
At the start of Wednesday evening’s event, Chu surprised by calling on Tsai and Soong to agree to change the final TV presentation, scheduled for January 8, into another debate.
According to the original formula, the candidates will have a debate on Saturday January 2 and a final presentation on Friday January 8. The vice presidential candidates had their debate last Saturday and will present their views on January 4.
As the KMT candidate picked in on the actuality to press Japan to act on Taiwan’s comfort women after it had agreed to compensate South Korean victims, Soong wondered why the government had waited until Seoul had won its case before taking action itself.
Tsai promised a national conference about youth issues, which would reach a consensus and propose the results to the Legislative Yuan.
Tsai addressed parents, telling them she knew that the next generation was finding it harder and harder to afford a home, so there was a need for extra social housing. While Chu regarded subsidies also as a form of social housing, Tsai said she would push for new housing and for encouragement for construction companies.
The DPP leader also emphasized food safety, promising she would not let the public fend for itself. What was needed was not organizing a poster design competition, but taking measures to closely watch the food production chain and raise fines for violators.
The government was also leaving elderly people to their fate, failing to heed their needs and take care of them, Tsai said, advocating better long-term care at safe communities.
Chu mainly reflected on his experiences as mayor of New Taipei City while also advocating more cooperation between business and education to promote technical careers.
Soong called for more effective government and for more attention for the low-income and weaker segments of society, while Tsai accused Chu of waiting until the last few weeks of the campaign before proposing policies the KMT could have enacted eight years ago. “The public can look at the (KMT’s) policies, but it can’t taste them,” she said.