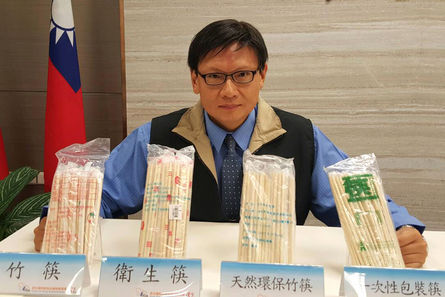 Taiwan’s Food and Drug Administration ordered 17 tons of disposable chopsticks to be removed from the shelves after they were found to contain deadly toxins, reports said Wednesday.

Among the 225 samples inspected, the administration found one batch of chopsticks containing dichloro-diphenyl-trichloroethane (DDT), and three other batches that showed residues of hydrogen peroxide.

The morning announcement again raised the alarm about the safety of disposable chopsticks, many of them imported from factories in Vietnam.

Beginning this year, authorities have kicked off inspection tours of the nation’s 172 retailers, including shopping malls, and disposable kitchenware distributors in an attempt to safeguard consumers amid the worsening food safety concerns.

Dubbed the “poison of the century,” DDT can enter the human body via contaminated food, water and air, and can cause chronic effects on the nervous system, causing excitability, tremors and seizures, he said.

“Unscrupulous suppliers have been caught to recycle disposable chopsticks and apply sulphur dioxide, DDT, hydrogen peroxide, and other chemicals to disinfect and bleach them for resale,” Liu said.

The 17 tons of tainted chopsticks have been ordered to be removed from the shelves and destroyed, authorities said.

The FDA said the distributors are subject to fines ranging between NT$30,000 and NT$3 million (US$1,000 and US$100,000) in accordance with Article 47 of the Act Governing Food Safety and Sanitation.