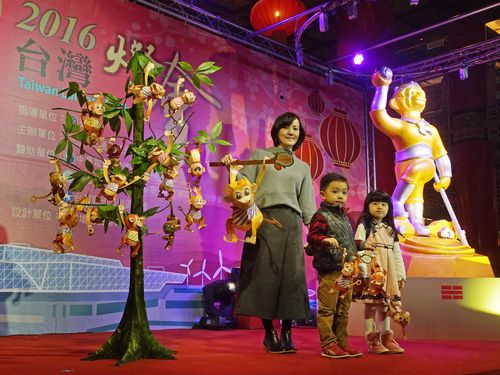 The main lantern of the 2016 Taiwan Lantern Festival will be a 26-meter-tall installation in the shape of the Monkey King, also called Sun Wukong (孫悟空), a main character in the Chinese classic "Journey to the West," the Tourism Bureau revealed Tuesday.

The Monkey King-shaped lantern will be the tallest main lantern ever in the annual event, which has been hosted by the Tourism Bureau since 1990 to celebrate the traditional Lantern Festival.

The 2016 Taiwan Lantern Festival will be held in the plaza in front of the Taoyuan high-speed railway station from Feb. 22 to March 6.

The Sun Wukong theme was adopted because it will be the Year of the Monkey next year, and the character represents courage and intelligence, according to the Tourism Bureau.

In the 16th century novel "Journey to the West," Sun Wukong is a monkey born from a stone who acquires supernatural powers through Taoist practices, according to Wikipedia.

After tamed by the Buddha, the monkey later accompanies a monk on a journey to retrieve Buddhist sutras from India.

The novel is widely known as Monkey, the title of Arthur Waley's popular abridged translation, in English-speaking countries.