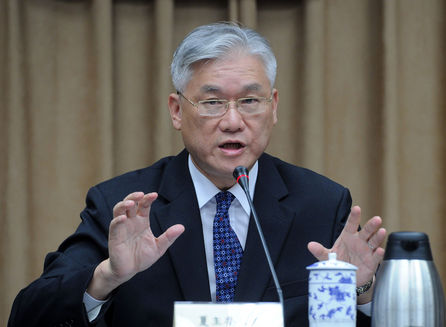 Taiwan-China hotline to open by Dec. 31

TAIPEI (Taiwan News) – The Taiwan-China hotline promised at the summit meeting between President Ma Ying-jeou and Chinese leader Xi Jinping will go into operation by December 31, the Mainland Affairs Council said Tuesday.
MAC Minister Andrew Hsia gave a positive response to reporters questioning him about the timing at a lunch Tuesday.
The telephone line will link Hsia with his Chinese counterpart, Taiwan Affairs Office chief Zhang Zhijun, and will be used for emergencies, the MAC said.
Tests had been going on for some time, and the final preparations were about to be completed, allowing the line to come into use before the year’s end, by the end of Thursday, Hsia told reporters.
The November 7 meeting between the leaders of Taiwan and China in Singapore was unprecedented, but came under fire for its lack of real achievements, while the Taiwanese opposition said it endangered the country’s sovereignty. Both leaders addressed each other as “Mister” instead of using official titles, and national flags were nowhere to be seen.
Democratic Progressive Party leader Tsai Ing-wen is highly likely to be elected president next January 16, with the inauguration set for May 20. She has said she would “maintain the status quo” in relations with China, though she is expected to take a tougher line in favor of Taiwanese interests.
During his eight years in power, Ma has become highly unpopular partly because of his failure to revive the economy but also because he has been seen as moving the island too close to China, endangering the island’s sovereignty and independence.