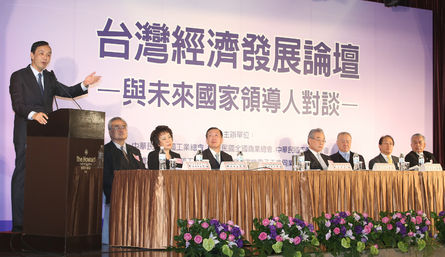 TAIPEI (Taiwan News) – Kuomintang presidential candidate Eric Liluan Chu told business associations Tuesday that the trend toward a nuclear-free Taiwan was impossible to turn back.
The opposition Democratic Progressive Party has proposed to turn the country nuclear-free by 2025, a policy which has come under fire from the KMT for being unrealistic and threatening higher prices.
As the third and final presidential candidate after the DPP’s Tsai Ing-wen and People First Party Chairman James Soong to address a forum hosted by seven business organizations, Chu said that a nuclear-free homeland had become a national consensus, and that the public had to change its attitude and learn how to conserve energy.
Energy should be safe, clean, effective and reasonably priced, the ruling party candidate said. Chu defended his statements in favor of a nuclear-free homeland as being not motivated by ideology, but by common sense. He wanted a gradual reduction in the use of nuclear energy which was responsible to the public, he said.
Chu cited the examples of the American states of Pennsylvania and New Jersey which proposed complete and adequate plans to abandon nuclear energy. He also warned businesses that they had to give the example by restricting energy waste and addressing alternative sources.
As to the problem of nuclear waste, he said it was impossible to leave it inside Taiwan, so other advanced countries would have to be sought willing to import the waste, he said.
Chu is the mayor of New Taipei City, which has two of the nation’s three operating nuclear power plants on its territory, as well as the failed fourth nuclear plant project.
Anti-nuclear feeling reached a new crescendo in Taiwan after the March 2011 tsunami in Japan which led to the Fukushima nuclear disaster.