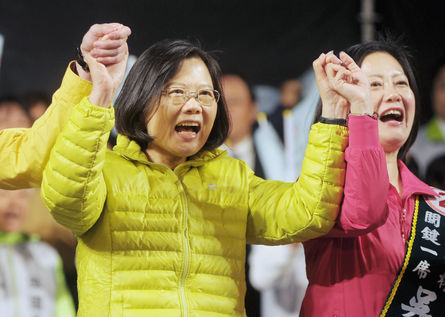 In the first presidential debate Sunday, Tsai harshly criticized the Ma Ying-jeou administration for promoting “diplomatic truce” in the past few years, leaving career diplomats not knowing what they’re fighting for.

The Presidential Office came to its defense, condemning Tsai for wishing to repeat the scorched earth diplomacy policy undertaken during the Chen Shui-bian administration, bringing great risks to cross-Strait and foreign relations. The Presidential Office pointed out the foreign policies under the DPP’s administration led the United States to label Taiwan a troublemaker.

She said the DPP adopts an active diplomatic approach to strengthen relations with allies and non-allied countries.

This active approach is unlike the current situation of a diplomatic shock or diplomatic truce that makes the country stand idle waiting for other countries’ goodwill, Tsai said.

Diplomacy is a national matter, not a partisan one, and should not be manipulated to gain votes in elections, Tsai added.