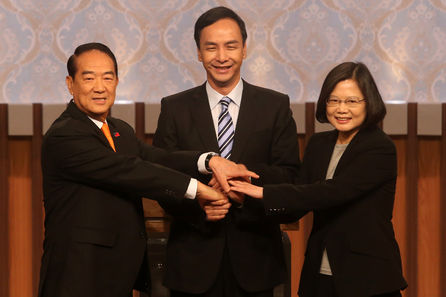 With just 18 days to the elections in Taiwan, the first presidential debate on Sunday failed to leave an imprint or even register with majority of the nation’s eligible voters, to say the least.

An opinion poll released by the United Daily News after the debate put Kuomintang presidential candidate Eric Chu at 19 percent, still 20 percent behind Democratic Progressive Party candidate Tsai Ing-wen. People First Party candidate James Soong, who usually garnered around 10 percent of the vote in previous surveys, received 12 percent. This goes to show that voter support for the three parties remains all but unchanged.

The televised event was a late chance for the KMT to bolster support in the face of their leading DPP opponent, but Chu’s repeated argument involving cross-strait relations and the 1992 Consensus has become so banal that it failed to instill excitement. For his lackluster debate on Sunday, those polled in the UDN survey gave Chu 21 percent on performance, on par with Soong while Tsai scored 31 percent.

The humdrum election debacle did not turn KMT’s campaign around, as the lukewarm sparring between Chu and Tsai failed to impress observers, who said the former missed an opportunity to sway undecided voters.

One of the biggest potentials for fireworks during the debate was around Chu’s minimum wage plan. It has been much maligned by political opponents and economists, who said his pledge to impose the NT$30,000 (30K) per month salary standard within four years if elected would be a tall order.

To the dismay of many non-KMT supporters, both Tsai and Soong didn’t follow up to attack Chu’s proposal, who could have countered by asking him to elaborate on the method, and why his 30K plan didn’t correspond to his running mate’s 40K pledge during the vice presidential debate on Saturday.

But netizens didn't let that opportunity slip by, who mocked and sneered on social media that the KMT should have given 30K a long time ago if they had really meant to perturb the business community in order to solve the minimum wage problem.

On further note, a common misgiving among the leaders on Sunday was that they tried to recite information without elaborating policy details, which unfortunately for a lot of voters, this translated to a bewildering array of semi-explained promises.

While the purpose of an election debate is to expose candidates' policies, opinions and criticisms (on opponent policies) to potential voters, the stage on Sunday was needlessly underwhelming. Much of the time spent bashing and belittling each other revolved around cross-strait relations, President Ma Ying-jeou, Lee Teng-hui, and Chen Shui-bian, all of which are topics of least concerns amongst the majority of voters.

What the three leaders failed to understand was that the people are vying to hear about their opinions and concrete responses against government corruption, the prevalence of industrial and air pollution, food safety, housing, low pay (excluding minimum wage), deteriorating environment, government-corporate collusion, and so forth.

“People were looking for a vision, a direction for the country and a new set of values. They were looking for strategies for Taiwan to be successful and new definition of the word success and they didn't see any of it," a political commentator noted in the aftermath of the debate.

Although partisans will all be pleased with their leaders' performances, observers believe no leader came across as particularly strong.

Soong, who has been sidelined ever since he announced his presidential campaign in August, has little hope that his ideals will ever materialize. Chu and the KMT, on the other hand, have preached their rhetoric on the 1992 Consensus for so long that it has worn out on the majority of voters.

In short, the likely scenario on January 16 remains unchanged, where Tsai will be proclaimed Taiwan’s first female president. Although her performance on Sunday was far from impressive, it can be said that Tsai’s winning ticket next year is largely owed to Ma’s incompetency. The disdain for Ma and his ruling KMT has led the public yearning for a political transition.

In the next and final round of presidential standoff on January 2, Tsai would only need to tread carefully over the two-and-a-half-hour debate, and play safe to avoid losing votes – or inviting attacks.

For now, it appears Tsai still has the upper hand.