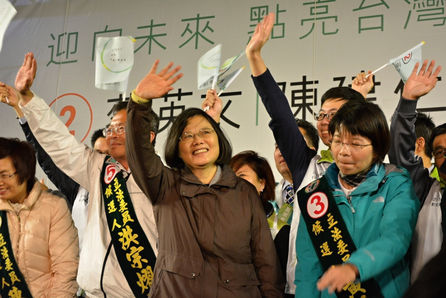 TAIPEI (Taiwan News) – Democratic Progressive Party presidential candidate Tsai Ing-wen promised Tuesday she would not allow the government to destroy the business world’s opportunities to develop if she won the January 16 presidential election.
Most opinion polls over the past few months have given Tsai a commanding lead over her nearest opponent, ruling Kuomintang Chairman Eric Liluan Chu.
While the world had entered the information age, Taiwan’s laws were still mired in the industrial age, especially those in connection with government procurement activities, Tsai said.
The opposition leader made the remarks at a forum hosted by a national software association.
Not only the laws would be changed where needed, but the government’s own structure also needed to be adapted to modern times, Tsai said. Representatives of the companies said that for the past 20 years, a wide gap had grown between the needs of the sector and the government and laws governing it.
Creativity was often a result of different sectors and fields working across boundaries, business people said, but the government was running behind and was not used to cooperate with other domains, often using regulations that hampered more creativity and progress.
Tsai promised that her government would be more responsive to the latest developments and changes in business and would not be afraid to take the necessary actions.