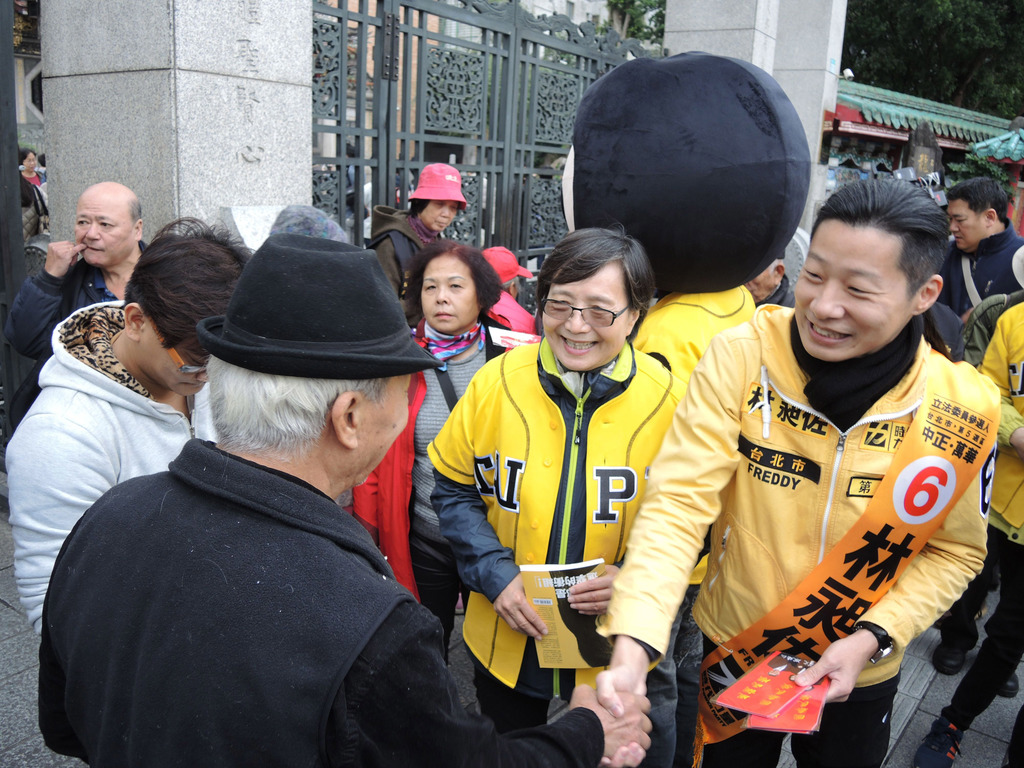 Yeh is the window of Cheng Nan-jung, a dissident, who chose to commit suicide rather than be arrested in 1989.

Lim’s campaign office said Lim made the acquaintance of Yeh in 2015 when he was on the “Rose Tour,” a national concert tour.

Yeh was in Lim’s motorcade, rooting for him along the streets in Taipei’s Wanhua District, the electoral district Lim belongs to. Later they gave away gifts to passersby at the entrance of the Longshan Temple.

Taipei’s Zhongzheng District and Wanhua District have traditionally favored KMT candidates in previous elections, winning a margin of 13 percent to 15 percent, Lim said, adding that the only way to turn the situation around is to make alliances, win more undecided voters and safeguard the anti-KMT camp.

Lim said Yeh is a big attraction as a great many people recognized her and waved at her during the 40-minute street campaign tour. Yeh was favored by voters in Wanhua District in her previous elections, Lim added.

As for cross-Strait relations, Lim said he agrees with Democratic Progressive Party presidential candidate Tsai Ing-wn’s statement in Sunday’s presidential debate that the 1992 Consensus is not the only choice for Taiwan. Taiwan’s fate should be decided by the 23 million people living in Taiwan, not by the negotiators of more than 20 years ago, he added.

Yeh said she has not noticed any changes in Lim since 2005 because he is still enthusiastic and has passionate love for this land, adding that she encourages young people to participate in politics and discussions of public issues. As for Taiwan’s future and hope, Yeh cited his late husband by saying, “The rest is your business.” To which Lim replied, “Yes, the rest is our business.”

Lim is lead singer of Chthonic, the country’s most famous heavy metal band. On Saturday night, tens of thousands of music fans gathered in Liberty Square for an extraordinary free concert which marked the 20th anniversary of the band.

But this was not just an ordinary gig; it was also a political rally ahead of the crucial presidential and legislative elections on January 16, 2016. Described as a “concert to calm the soul and defend the nation”, the event was organized to energize Taiwanese youth and gain political support for Lim’s new role as a NPP legislative candidate.

“We felt it was time, at this key moment in Taiwan’s politics, that we join together with our fans and get the energy going again,” said Lim. “It’s a show of how we support freedom of speech and to encourage our fans to try their best over the coming years to change Taiwan for the better. There is a new political space and it will allow more and more young people to bring about real change in Taiwan.”

Lim’s band has gained popularity through mixing Taiwanese classical music and traditional instruments, as well as language, with their music and through lyrics which often incorporate national folklore.