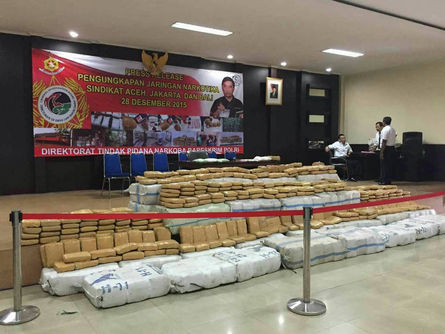 The National Police Agency (NPA) revealed Monday that the Indonesian police have seized 1,700 kilograms of marijuana destined for Taiwan with a combined market value of nearly NT$200 million (US$6.1 million).

The bust was the results of a combined effort with Indonesian authorities that a drug-smuggling ring planned to smuggle marijuana into Taiwan from Jakarta before the Chinese New Year holiday.

The NPA said Taiwan has been providing Indonesian police with intelligence about criminal activities involving Taiwanese nationals suspected of controlling the manufacture, shipment and trade of drugs from abroad.

The 39 sacks of marijuana confiscated on December 16 marked another series of joint surveillance and investigation operations between Indonesian and Taiwanese police this year, it said.

NPA officers responsible for international affairs traveled to Indonesia on December 15 for a joint meeting on the case. The next day, the police officers worked along with an Indonesian anti-drug team to intercept a truck carrying marijuana from Aceh to Jakarta.

According to the NPA, two men on the truck, including the driver, were arrested.