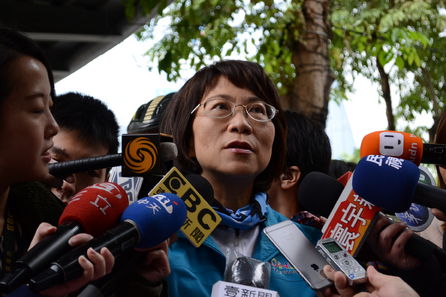 Kuomintang’s propaganda move to raise the nation’s minimum monthly wage has sparked a huge public debacle as KMT presidential candidate Eric Chu remarked during the televised election debate on Sunday that he would increase the minimum salary to NT$30,000 (30K) if elected, contrary to what his running mate Jennifer Wang had promised a day earlier that the number would be NT$40,000, or 40K.

The downgrade from 40K to 30K in mere 24 hours of their speech has led many to believe whether there was a breakdown in the communication channel between Chu and Wang, or if Wang simply exaggerated her pledge to seek sympathy from voters as a result of her tarnished reputation in the housing scandal.

The KMT vice presidential candidate however pointed out Monday that her 40K pledge meant the nation’s fresh graduates would first need to undergo a so-called “vocational training program” in order to benefit the 40K monthly salary.

“I was only expressing the hope that in the future, 40K would become the norm for certified young people,” she said, adding that those opting to go through the program are guaranteed to earn more than that.

Wang again clarified that Chu was referring to the minimum monthly wage under the Labor Standard Act, while her proposal was a completely different initiative.

Commenting on whether she acknowledges Chu’s 30K policy, Wang said from an employee’s perspective, nothing is ever enough in terms of personal income, adding that it was the primary reason why she had left her position as Labor Affairs minister in 2012, as she has was unable to help raise the minimum salary for the nation’s workers.