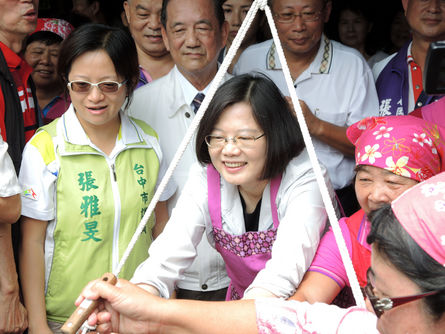 The presidential contender has since been wooing supports from Hakka communities in northern Taiwan, where she has vowed to come up with policies to preserve the Hakka culture and language.

Yeh, who is also a Hakka, made the comments during a campaign rally for New Power Party legislative candidate Freddy Lim in Taipei.

“I remain optimistic and confident that Tsai will win majority of support from Hakka communities in Miaoli, Taoyuan and Hsinchu,” Yeh said.

Tsai, who had lost nearly 400,000 Hakka votes during the 2012 presidential election, said in a previous report that she aims to turn the tide of the game next January.

Although a Hakka, Tsai said she had not been able to gain fluency in the Hakka dialect because that language was suppressed during the authoritarian period of Taiwan's history.

The plans she outlined to revive the Hakka culture also includes the establishment of a rural development fund for Hakka communities, and linking Hakka-themed tourism resources along Highway No. 3 from Taipei to Pingtung, reports said.

The ethnic Hakka population in Taiwan is 6 million, comprising 26 percent of the total population, according to statistics from the Cabinet-level Hakka Affairs Council.