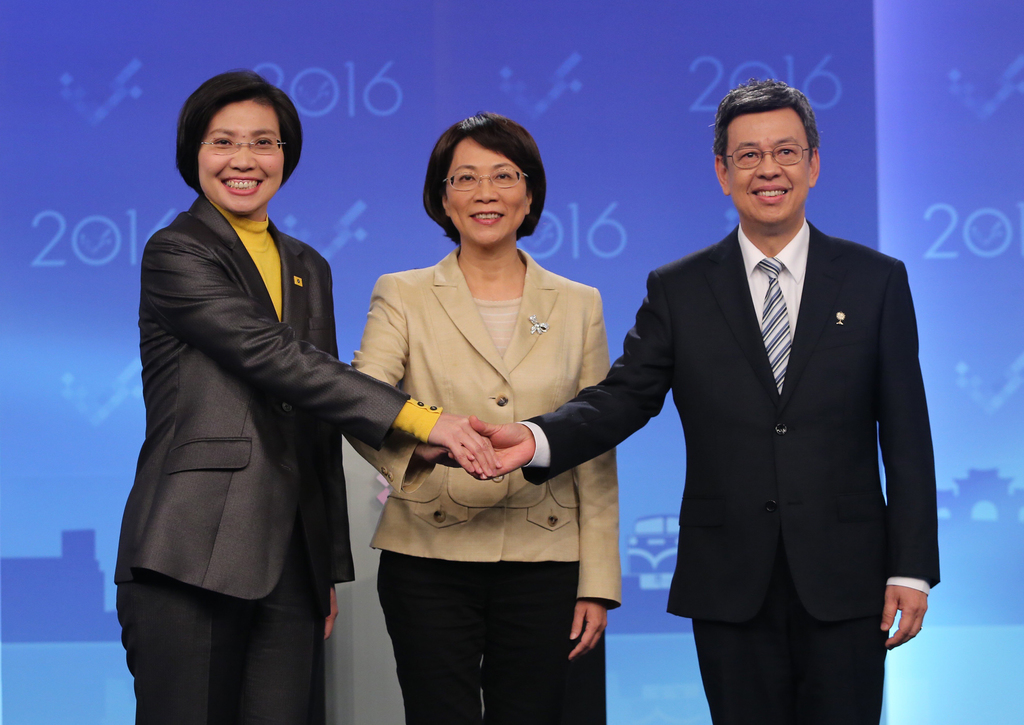 TAIPEI (Taiwan News) – Vice presidential candidates Jennifer Wang of the Kuomintang, Chen Chien-jen of the Democratic Progressive Party and Hsu Hsin-ying of the People First Party-Minkuotang ticket exchanged views about social and economic issues in their only live televised debate of the campaign Saturday.
Debates between the three presidential candidates and party chairmen, Eric Liluan Chu of the KMT, Tsai Ing-wen of the DPP and James Soong of the PFP, will take place on Sunday, December 27, and on Saturday January 2. Election day is January 16.
Hsu opened the afternoon by praising presidential candidate James Soong as the only of the three candidates who had nationwide government experience.
Kuomintang vice presidential contender Jennifer Wang started talking from her experience as a campaigner for women’s rights, which brought her to politics because it had the power to effectuate real change.
“Some people are second-generation rich people, some are second-generation officials, but I am a second-generation laborer,” she said, referring to her background as a labor lawyer and minister of the Council of Labor Affairs.
Wang also apologized again for the recent allegations of real estate speculation against her. Soon after her nomination by the KMT, she admitted to having bought a dozen military apartments and resold nine of them at a profit.
Chen said he was motivated to accept the vice presidential candidacy by the earnest, creative and hard-working young people he saw. When he told them they were Taiwan’s hope and future, they would reply they saw no hope and no future, the former Academia Sinica vice president said. They were restricted by wages as low as 16 years ago, preventing them from building a future, from marrying and from having children, he said. The DPP candidate emphasized social justice and the need to fire up the economy.
Wang, 54, was a prominent labor and women’s rights activist before she served as labor minister from 2008 to 2012.
Chen, 64, was health minister from 2003 to 2005, when he gained prominence as the lead fighter against the outbreak of Severe Acute Respiratory Syndrome or SARS.
Hsu, 43, is a former KMT lawmaker who broke away and founded the Minkuotang or Republic Party before joining forces with PFP Chairman James Soong.