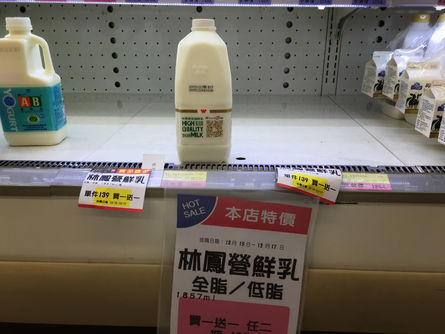 TAIPEI (Taiwan News) – Wei Chuan Foods Corporation said Friday it would sue nine Internet users for allegedly spreading false rumors about its Lin Feng Ying dairy brand.
Wei Chuan is part of the Ting Hsin International Group, which has been the focus of consumer boycotts over scandals involving the use of animal-feed oil in cooking oils for human consumption.
Wei Chuan said it was asking its attorneys to file defamation suits with the Taipei District Prosecutors Office against the holders of nine online accounts, which it named in a list Friday.
The company said its decision to take legal action was unrelated to the latest consumer boycotts, though it accused the netizens of spreading old rumors about Lin Feng Ying brands being “chemical” dairy products with additives which meant they could not go bad.
Wei Chuan said it respected the choice of consumers, but it could not allow people to spread malicious rumors which hurt the company and the more than 100 dairy farmers it cooperated with.
Wei Chuan emphasized its products were pure milk without additives which had undergone 948 tests in 14 categories, making them correspond to the CNS 3056 quality label.
In addition to Wei Chuan, Ting Hsin also has interests in other food products, in real estate, including a stake in Taipei 101, and in telecom operations.