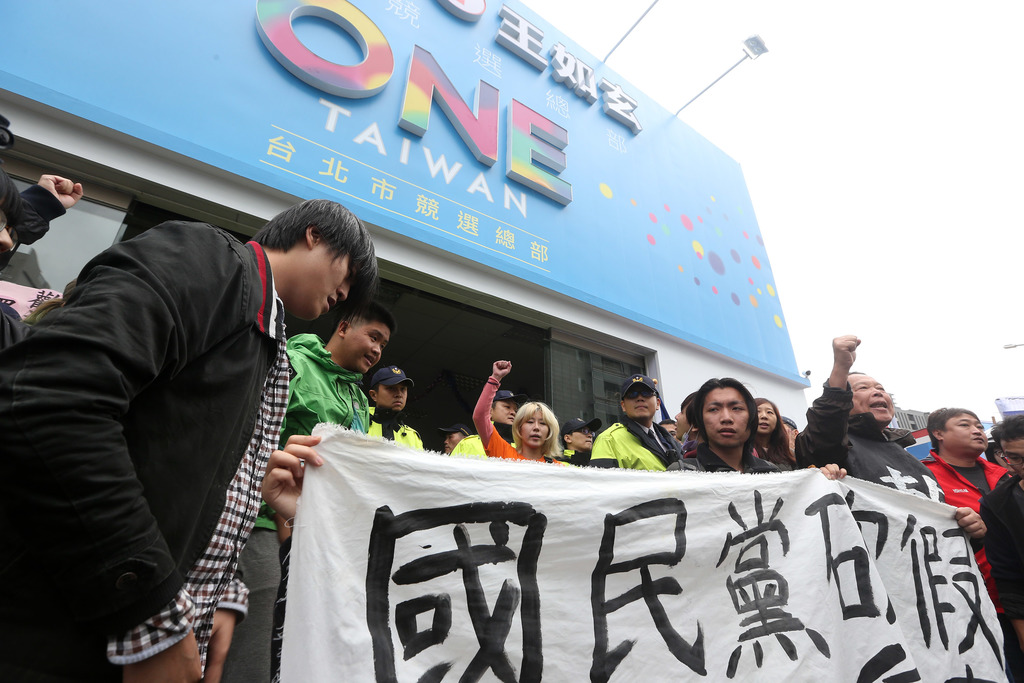 TAIPEI (Taiwan News) – Labor activists protesting against a government decision to cut the number of days off scuffled with police and daubed red paint inside the campaign headquarters of Kuomintang presidential candidate Eric Liluan Chu Friday.
The government recently announced that on January 1, it would introduce a 40-hour week for laborers, which also included cutting back the number of national holidays to 12 from 19.
Dozens of labor activists made their way into the Chu campaign offices in Taipei City Friday morning and stayed there to occupy the site for a while. During their stay, they wrote slogans in red on the walls and on Chu posters, including “Give us our days off back” and “The KMT cuts our holidays, Chu must shoulder responsibility.”
The candidate, who also chairs the ruling party, should call on the central government to rescind its decision and reinstate the lost days off, the activists said.
When police appeared to evacuate the premises, scuffles broke out, and at least one protester was taken into custody, reports said. The 22-year-old man, surnamed Su, was likely to face charges related to public disturbance, illegal entry and damage to property. More detentions were likely as police would study camera recordings, reports said.
Chu chose former Labor Minister Jennifer Wang, a well-known labor rights activist, as his vice-presidential running mate, but the selection soon elicited complaints from labor groups, who accused her of presiding over high unemployment and low salaries.
Wang is scheduled to take part in the only live televised debate for the vice-presidential contenders on Saturday afternoon.