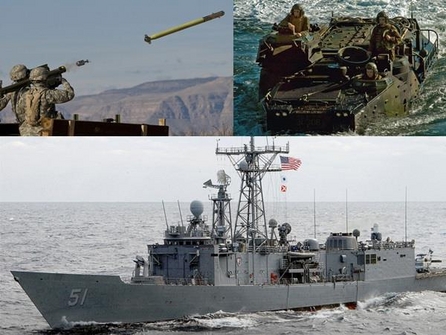 A week ago, the Obama Administration announced the sale of $1.83 billion dollars of weapons to Taiwan, including two warships, antitank missiles, amphibious attack vehicles and communications systems. The arms package drew a quick rebuke from China, threatening not to do business with American companies involved in the arms deal.

The New York Times, an American daily newspaper, published an article on Thursday, commenting on the arms sales, and called it “a modest and unsurprising sale from the United States, which has been supplying Taiwan with weapons for years.”

“The complaints are overblown,” said the article, referring to Beijing’s objection to the deal. “Chinese leaders would do better to look at how the tensions over the sale flow directly from their own actions.”

The article pointed out that Taiwan’s arsenal would be much less of an issue if China had not aimed hundreds of missiles at Taiwan, and left open the possibility of seizing Taiwan by force at some point.

While the United States is required to provide weapons for Taiwan’s defense under the Taiwan Relations Act since 1979, the new arms package would hardly be an issue for China as it has improved its military capabilities so much, that “Taiwan would not be able to repel a punishing airstrike or an invasion if Beijing decided to take that course,” the article said.

As Taiwan’s presidential election taking place next month is expected to be won by the Kuomintang’s political rival, the Democratic Progressive Party, which favors a more distant relationship with Beijing and the assertion of Taiwan’s own identity, the article suggested that China should focus on building productive ties with Taiwan.