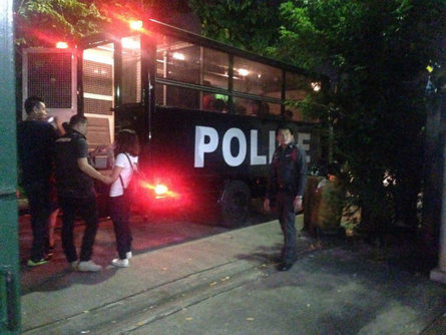 The 27 suspects were arrested at an apartment in Bangkok after Thailand's Central Investigation Bureau received a tipoff, Thai police said.

However, one person got away during the raid in which police also picked up a Thai and Burmese home helper.

Thirteen of the suspects -- 10 men and three women -- are Taiwanese nationals, according to Taiwan's representative office in the Southeast Asian country, which was contacted to help check their identity.

Internet equipment, several notebook computers and 30 phones were seized at the apartment, which was equipped with soundproofing and surveillance devices, Thai police said.

They said the alleged fraudsters had made over 100 million Thai baht (US$2.77 million) by tricking Chinese citizens into wiring money to them.

In August, 11 Taiwanese nationals were arrested when another fraud ring was busted in a nearby area. They are being held in custody in Thailand, awaiting trial. (By Liu Te-chan and Kay Liu)