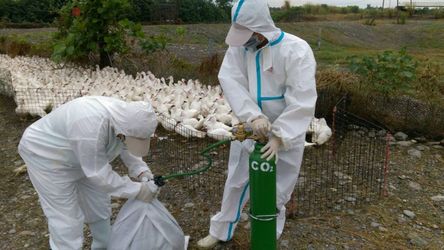 Over 600 geese culled in Chiayi due to avian flu

A total of 602 geese were culled on a poultry farm in southern Taiwan's Chiayi County after it was confirmed that they had been infected with H5 subtype avian flu, officials said Thursday.

Officials confirmed that the six-week-old geese had been infected with the flu a day earlier, and followed standard procedures in culling the animals and disinfecting the farm, according to the Council of Agriculture's Bureau of Animal and Plant Health Inspection and Quarantine.

The bureau urged poultry farmers to stay vigilant and report any abnormalities they observe, saying the outbreak could continue if farmers fail to implement control or prevention measures.