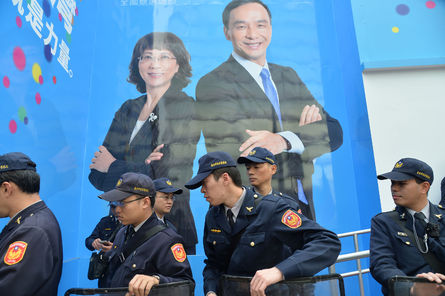 TAIPEI (Taiwan News) – Some supporters of the Kuomintang could vote for other parties for at-large seats at the Legislative Yuan, commentators said Thursday.
On January 16, each voter will have three ballots, one for a presidential candidate, one for a directly elected local legislator, and one for a list of at-large legislative candidates proposed by a political party.
Because of internal divisions, KMT supporters might on the one hand cast their ballot for the party’s presidential candidate and local legislator, but they might pick another party for the at-large list, reports said.
The 113-seat Legislative Yuan counts 34 at-large seats to be divided according to proportional representation among the parties which win at least 5 percent of the vote.
Legislative Vice Speaker Hung Hsiu-chu told reporters Thursday that she had also heard the report that some KMT grassroots supporters might choose split voting on January 16. She said she regretted the fact, but also noted that the KMT leadership should reflect on the matter. Hung called for solidarity and said legislative candidates should be more direct in telling voters what they wanted to achieve once elected.
Earlier in the week, outspoken KMT lawmaker Alex Tsai wrote online to complain about Legislative Speaker Wang Jin-pyng’s alleged statements that the negotiations surrounding the trade-in-services agreement with China had been too opaque. If voters agreed with that statement, they could vote for the KMT’s at-large list, which is headed by Wang, but if they don’t, they should cast their ballot for the New Party, Tsai wrote.
The trade pact was signed by Taiwan and China in 2013, but attempts to pass it in the Legislative Yuan failed when students and other protesters occupied the legislative compound in March and April last year.
Political commentators said that split voting might cause the KMT to hold on to even fewer seats than originally expected. The main opposition Democratic Progressive Party could win a majority in the Legislative Yuan for the first time ever, according to many observers.