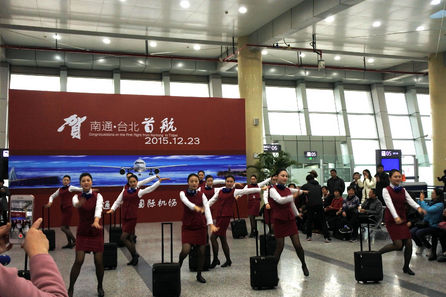 Shenzhen Airlines, currently the only airline to operate the route, will initially sell tickets with special prices. For example, a round-trip ticket if booked 21 days in advance sells for RMB 1,000 (about NT$ 5,000, taxes not included).

To celebrate the occasion, Shenzhen Airlines female flight attendants danced to the tune of the famous Taiwan folk song “Green High Mountain” and other songs at the Nantong airport before the plane took off at 8:40 AM. The flight takes about 100 minutes.

Shenzhen Airlines currently operates one flight per week on Wednesday, and will have three flights per week from January 25, 2016. After Eva Air joins in the operation of the route at the end of March 2016, there will be five flights per week.

Some Taiwanese businesspeople said the direct flight will make transportation to and from Nantong much easier and save a lot of time.