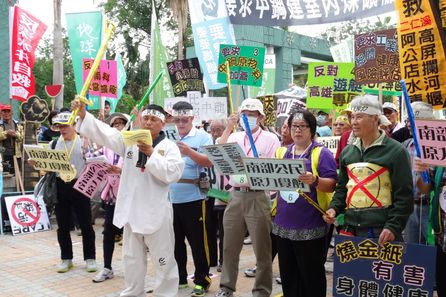 TAIPEI (Taiwan News) – A march against pollution planned for Taipei Saturday is due to feature a giant inflatable lung and a face mask to cover the Presidential Office Building, according to media reports.
Taiwan has recently suffered from severe air pollution blamed on the “purple haze” from China.
Environmentalists and other citizens concerned about the impact of the pollution on public health have applied to stage a march through the streets of the capital during the afternoon of December 26.
While the event was likely to feature the usual skits and marchers in disguise, the organizers also plan to import a giant inflatable lung, the work of European artist Artur van Balen. The lung, which is reportedly 8 meters long and 4 meters wide, has appeared at protests in several countries, including Germany, Indonesia and Croatia, reports said. Actions outside the recent global climate change conference in Paris also featured the balloon.
A giant reproduction of a face mask will also be carried along in the march, with its aim to as-it-were cover the Presidential Office Building, organizers said. The event was due to fix the attention of the incumbent president and of his successor on the problems posed by excessive air pollution.
The march is likely to coincide with the sole live televised debate by the three vice-presidential candidates in the January 16 election.
Protesters will gather outside the Environmental Protection Administration around 1 p.m. Saturday before heading out along Zhonghua Road, though the old city center and close to the Legislative Yuan before ending up on Ketagalan Boulevard in front of the Presidential Office.