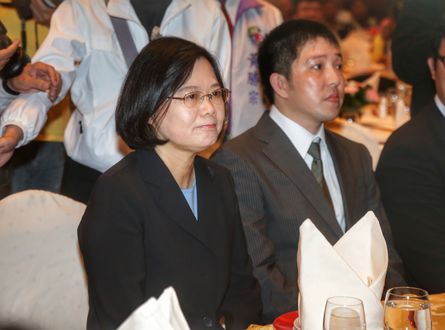 Democratic Progressive Party presidential candidate Tsai Ing-wen pointed out Wednesday that she hopes the Kuomintang could freeze its controversial assets prior to the upcoming January elections.

During the Martial Law period, the then-authoritarian KMT regime took over properties formerly held by the Japanese colonial government. Instead of listing all of them as national properties, the KMT took over some of them without going through due process.

Commenting on rumors that the KMT is trying to sell out its party assets, Tsai said this has led many to believe that it is doing so to avoid supervision from the next legislature.

“People are suspecting that the KMT is trying to sell off its party assets before the legislative and presidential elections,” Tsai said during a community leadership gathering in Taipei.

When asked about the ruling party’s latest polling results which suggests that KMT presidential candidate Eric Chu only trails Tsai by 9.5 percent, the DPP contender however said bias often plays out in government-run surveys, suggesting voters to refer to polls conducted by public polling agencies.

“Regardless, this will not stop us from forging ahead with our remaining campaigns,” Tsai said.

Asked if her sister Tsai Ying-ju, who just returned from abroad, will join her in the election campaigns, Tsai said it all depends on her. “I respect my sister’s views and opinions.”