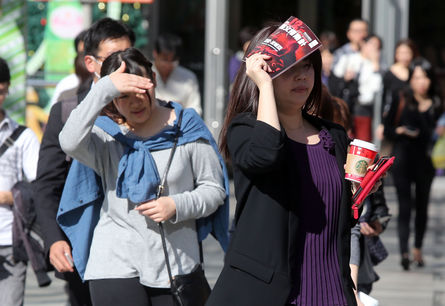 The Taipei Weather Station registered a record-breaking temperate of 30.5 degrees Celsius at 2:01 PM on Tuesday, making it the hottest winter solstice in Taiwan in 67 years.

According to Central Weather Bureau reports, 30.5, 30.2 and 29.9 degrees Celsius respectively registered in Taipei City, Banqiao and Tamsui were the highest temperatures in Taiwan on Tuesday.

The bureau said the environmental wind field turning to southeast wind, northward movement of the southern warm air masses, and little clouds in the sky combined to make the temperature rise, which was especially evident in central and northern Taiwan.

Highs of between 25 and 28 degrees Celsius were registered across Taiwan Tuesday, making people feel a bit hot when engaging in activities under the sun, the bureau said.