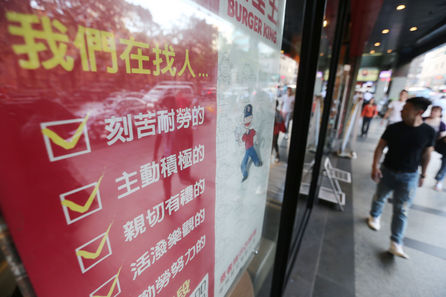 As Taiwan’s export order fell for the eighth month in a row, the unemployment rate increased 0.01 percent from the previous month to 3.91 percent, suggesting a continuous downturn in Taiwan’s economy.

According to statistics provided by the Directorate-General of Budget, Accounting and Statistics (DGBAS), the unemployment reading has reached its lowest point since January. The number of unemployed persons has increased 2,000 to 457,000.

Due to shrinking demand for labor market caused by workplace downsizing and companies out of business, the number of unemployed persons has increased for five consecutive months, DGBAS deputy section head Chang Yun-yun said at a press conference on Tuesday,.

In addition, young people are still struggling to find a job as the youth unemployment rates stood as high as 12.73% among those aged between 20 to 24, and 6.63% for those between 25 to 29 years old, according to the DGBAS statistics.