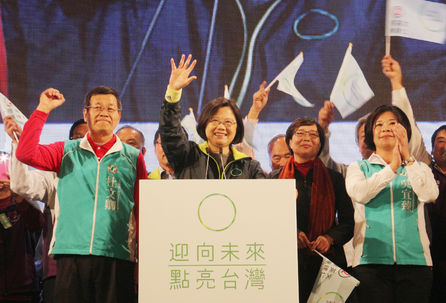 Democratic Progressive Party (DPP) presidential candidate Tsai Ing-wen said on Monday that the DPP, if elected, will strive to assist in the development of the Miaoli County, to overcome its financial crisis, bringing more resources and reforms to the county.

Tsai on Tuesday evening attended a rally in Miaoli, stumping for the party’s legislative candidates, Tu Wen-ching and Wu Yi-chen, and pledged to overturn and restructure the local government’s financial debt.

While traditionally a Pan-Blue stronghold, Tsai stressed that the DPP has never thought about giving up Miaoli, which is considered one of the most difficult constituencies for the DPP.

Tsai also promised to establish senior care communities not only for Miaoli, but also for the entire nation, to provide better elderly care for places with an aging population.

In addition, Tsai also talked about her plan to revive the Hakka culture in Taoyuan, Hsinchu and Miaoli, areas in Northern Taiwan with a heavily-concentrated Hakka population, by promoting traditional industry upgrade, and creating business opportunities to bring young people back.