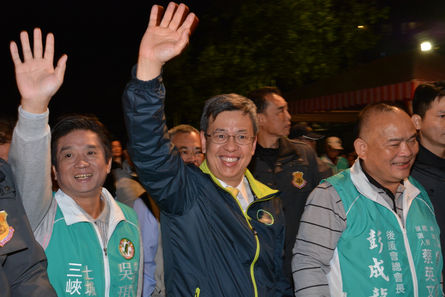 Huang said the DPP had set up a debate task force in September to prepare for the debates, including collecting information and simulating debates.

Huang praised Chen for being “extremely smart.” He said he handed Chen an information scrapbook of more than 200 pages to prepare for the student-led forum on December 6. Chen finished studying the book in two nights on his campaign trail and then made the most of the information during the forum, Huang added.

Chen has good memory; and his way of speaking is logical, sincere and stable, Huang said, adding, “Being natural is his strength.”
The current preparation focuses on debate simulation to train candidates to clearly express his or her position on a pop issue in 90 seconds, Huang said.

As for the first presidential debate scheduled to take place on December 27, Huang said DPP presidential candidate Tsai Ing-wen has prepared for quite a while and will demonstrate her confidence and understanding of the country’s situations.

Besides debates and a couple of policy presentations before the year ends, the candidates have many other activities to attend on their campaign trails, Huang said. Chen will go to the offshore islands of Matsu Tuesday, and Tsai is scheduled to appear in Kaohsiung on Christmas Eve, in Taichung and Changhua on December 26, and in northern Taiwan after the debate on December 27.