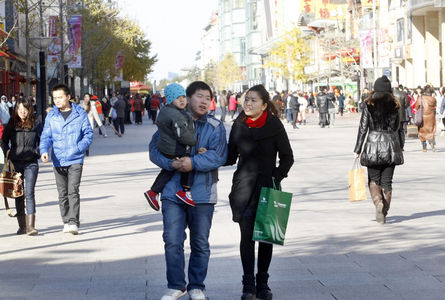 Chinese government is planning to amend the family planning law to allow couples to have two children, which if passed will take effect in January, marking the end of the one-child policy era.

In October, the Chinese government made the announcement to lift its one-child policy, which was introduced in 1979. The change in policy is expected to see more than 3 million additional births per year, and to boost the economy amid slowing growth.

The amendment was submitted for review at the National People’s Congress Standing Committee session on Monday, which came amid the government’s effort to counter the nation’s aging population and labor shortage problems.

To advocate its “one couple, two children” policy, Beijing is extending its maternity leave for married couples who have two children, along with other benefits, to encourage couples to have a second child.

In addition, the draft no longer stipulates couples to accept technical services and guidance for family planning.

Prior to the two-child policy, the Chinese government has been strict in implementing the one-child policy, which was designed to rein in the surging population. Beijing relaxed the policy in 2013 and allowed couples to qualify for a second birth if one of the parents was an only child.