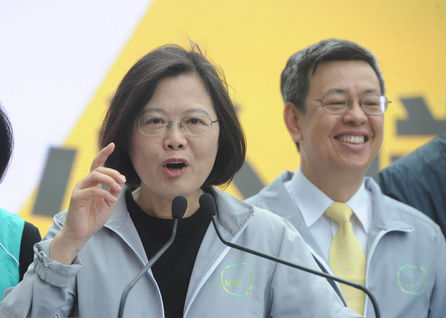 Democratic Progressive Party presidential candidate Tsai Ing-wen on Monday sneered at the Kuomintang for their defamation tactics, and that: “taking cheap shots at me or the DPP will not help cover up their incompetency.”

Following the party’s fundraising campaign in Changhua Sunday morning, Tsai later joined Taoyuan Mayor Cheng Wen-tsan in the evening at a local rally where more than 10,000 supporters turned up to show their support for the DPP.

“The ruling KMT has nothing else to go on other than using smearing tactics,” she explained.

Tsai returned to Taoyuan and said that the situation is relatively more stable in southern Taiwan, so she would focus on regions where the support is relatively weaker, such as Taoyuan, Hsinchu, Miaoli and New Taipei City.

“The people are disappointed with the KMT. It’s time for a change.”

The DPP presidential candidate, who has repeatedly called for a clean election, said the KMT has been reluctant to reflect on their past misgivings, and that their demise is inevitable.

“The nation needs to move on, to progress and develop for the well-being of its people,” Tsai said.