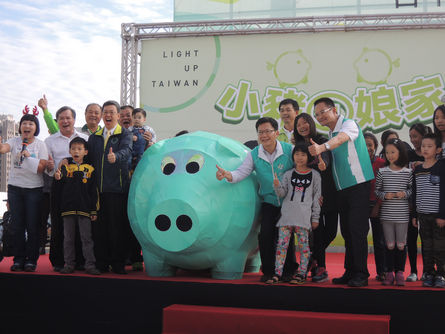 The Democratic Progressive Party’s “piggy banks return home” campaign in the morning has proven to be so successful that it would take till evening before all the donations can be counted, the party headquarters revealed Sunday.

The DPP has since been giving out small piggy banks to its supporters, encouraging them to fill the banks and return them to the party as a form of small-scale fundraising.

The “piggy bank” idea emerged during Tsai’s presidential run in 2011, when three children donated the contents of their piggy banks to her campaign.

“Tsai must win in January!” supporters cheered as both presidential and vice presidential candidates Tsai Ing-wen and Chen Chien-jen joined the stage in a campaign rally in Changhua.

So far the event has collected around 250 piggy banks, some of which have NT$1,000 bills stuffed in them, according to the campaign staff.

“I’ve always been in support of Tsai because the Kuomintang is simply too incompetent to govern,” an avid supporter surnamed Yang said during the rally.

In an earlier report, the DPP headquarters said it could not keep up with supporters’ demand for the banks, as many were being kept as souvenirs, so the party has had to produce a “souvenir version” that supporters can keep after turning in the original ones.

The “souvenir version” piggy banks also have Tsai’s signature on them, it said.