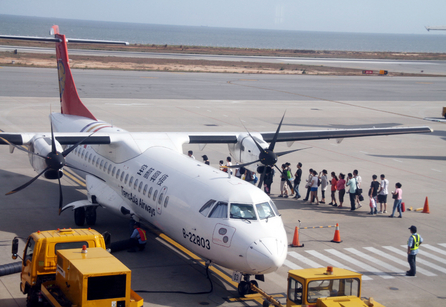 It will be the company’s first full-flight simulator for the latest generation of ATR aircrafts in Taiwan outside the manufacturer’s own training centers in Toulouse and Singapore.

“Making the device available will be an important step for us, and we expect to see it commissioned by the end of next year,” Peter Chen said, CEO of TransAsia.

“We are also planning to acquire simulators for our A320/321 aircrafts, including setting up a flight crew training center in Ilan,” he said.

The company has since been carrying out several measures to enhance aviation safety under the guidance of the Civil Aeronautics Administration following the tragic TransAsia Flight 235 crash that killed 43 passengers in Taipei earlier this year.

However, in the latest non-fatal incident involving TransAsia Airways, two of its pilots were suspended by the CAA for runway incursion at the Kinmen Airport in September.

According to authorities, TransAsia Airways Flight No. 2355 was instructed to wait on the taxiway because a Uni Air flight was coming in to land. Although the copilot repeated the air traffic controller’s instructions correctly, the aircraft continued moving toward the runway.

TransAsia said it was considering firing the two pilots over the incident, while reiterating its commitment to improving flight safety.