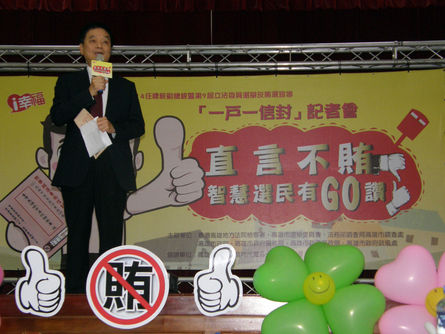 With the upcoming elections merely three weeks away, the Kaohsiung District Prosecutors Office has established a hotline to promote the fight against corruption, reports said Sunday.

The hotline (0800-024-099) describes the city government's efforts in combating corruption and asks the general public to become part of the team supervising the effort.

Informers who perceive or witness the act of bribery or any other illegal activities during the campaign period are advised to call authorities in the aforementioned hotline.

Should the allegations be established, and that there is enough supporting evidence to prosecute, the informant – whose identity will be kept confidential – will have the opportunity to collect NT$15 million as a reward, reports said.

The government will develop an integrity index system in the near future to advance administrative transparency, which, with the help of the people, will help the city be more effective in combating corruption, it said.