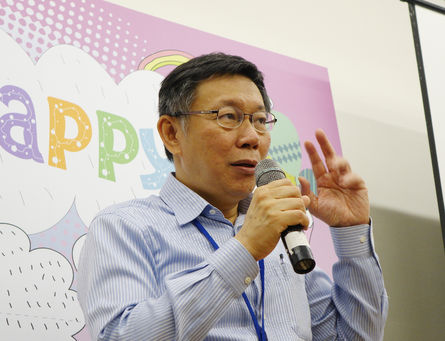 TAIPEI (Taiwan News) – Taipei City Mayor Ko Wen-je told reporters Friday he had no intention of running for president of Taiwan in 2020.
With Democratic Progressive Party Chairwoman Tsai Ing-wen almost certain to win the January 16 presidential election according to most opinion polls, some media have already started to look further ahead, to the next Kuomintang chairman or the next presidential election, in 2020.
Ko, who was elected mayor of the capital by a landslide just a year ago, told the Chinese-language Apple Daily that he had no intention of running for president right from the start and that the only thing he wanted to do was to do his present job right.
When the reporter remarked that KMT presidential candidate Eric Liluan Chu said 24 times he would not run before being selected last October, Ko assured that he would not do so.
The mayor said that he even could not tell yet whether he would be running for a second and final term as mayor in 2018. If he fell to 20 or 30 percent in the opinion polls, he would probably not run for re-election, Ko said. In any event, reporters should wait until 2017 before starting to ask that question, he added.
Ko said he probably would not have an opportunity to return to the medical profession. Before being elected mayor last year, he was the top trauma expert at the National Taiwan University Hospital. He said Friday that as he sometimes still visited patients at the hospital, he found how his own expertise was diminishing fast.
Ko ran as an independent in the 2014 election, but he was backed by the DPP. During the current campaign for the January 16 presidential and legislative elections, he has expressed support for a broad alliance of opposition legislative candidates in the capital trying to defeat their KMT rivals.
Some commentators have suggested that Ko could try and run for president in 2020 if Tsai is elected next month but performs poorly over the following four years.