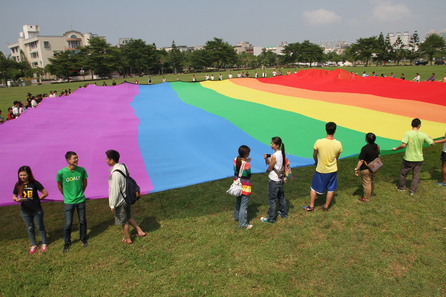 Gay rights activists in the southern city of Tainan on Thursday demanded that the city follow the examples of Kaohsiung, Taipei and Taichung and allow its gay residents to register their partners in the city's household records.

Kaohsiung, Taipei and Taichung have all opened household registration records to same-sex partners, but Tainan has yet to take a stance on the issue, noted the activists, who protested at the Tainan City Council. If Tainan does not support even the registration of same-sex partnership -- which is not the same as marriage -- it cannot prove that it cares about human rights, the activists claimed.

In response, Tainan City Bureau of Civil Affairs Director Chen Tsung-yen said different opinions in society should be respected and that the city government will not consider allowing same-sex partnership registration for the time being.

The activists said they will organize a rally in downtown Tainan on Dec. 26 to urge the city government to change its mind.

On May 20, the southern city of Kaohsiung became the first in the country to allow its gay residents to list their partners in the city's household registration records. Taipei and Taichung followed suit on June 17 and Oct. 1, respectively.

The designation of partners in the household records does not give gay couples the same rights as heterosexual couples, but it does allow registered gay couples to sign medical contracts for each other, something they had not been able to do in the past. (By Chang Jung-hsiang and Christie Chen)