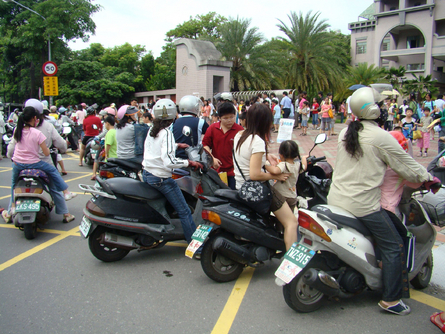 The city government’s Department of Environmental Protection plans to ban the circulation of two-stroke scooters in Taipei by 2019 and to implement a “low emission zone” next year whereby old rusty vehicles that spew black exhaust fumes will be forbidden in certain designated roads, reports said Thursday.

“Stiffer regulations will be carried out as part of our efforts to lower air pollution levels in Taipei,” department commissioner Liou Ming-lone said, adding that it will also work with governments in Keelung, New Taipei and Taoyuan for a joint effort to improve air quality.

The commissioner pointed out during the morning press conference that it is currently holding talks with the city’s transport operators to grant them refund subsidies in order to remove their ageing buses off public roads.

Meanwhile, the department is working with teams from the National Taiwan University (NTU) to carry out trials in a number of proposed routes in Taipei for low-emitting zones, he said.

Furthermore, the government also plans to purchase a mobile monitoring vehicle worth NT$9.5 million (US$297,000) to patrol the streets of Taipei at night.

“The vehicle will monitor air quality, and respond to and investigate most complaints of noise related to construction sites, street works, bars and clubs, night markets, gas stations, audible intruder, and vehicle alarms,” he said.

The proposed purchase still needs to be approved by the city council, Liou said, adding that should the request be finalized, the monitoring vehicle will be put to the test by 2016.