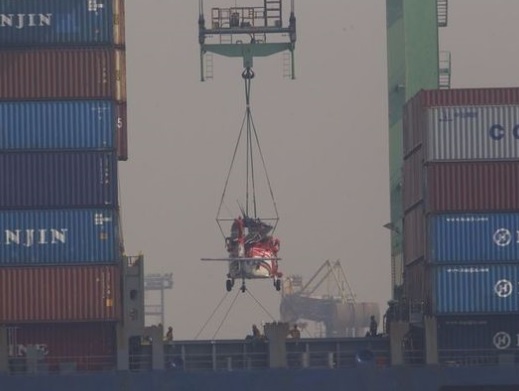 The first batch of three UH-60M Black Hawk helicopters used for Search and Rescue missions were delivered to Taiwan at the port of Kaohsiung, according to Ministry of the Interior (MOI) on Thursday.

The helicopters will be assembled and put through ground and air testing before being commissioned to Taichung’s Ching Chuan Kang Air Base in March next year, the ministry said.

The military has already taken three deliveries of UH-60M Black Hawks for the nation’s Army since December last year. Among the 60 helicopters ordered from the United States, 15 will be consigned to search and rescue operations during disaster relief, it said.

In early 2010, the US government announced it would sell Taiwan the 60 Black Hawks, worth a total of US$3.1 billion.

The Black Hawks are gradually replacing the army’s aging fleet of UH-1H utility helicopters and are to be deployed in northern and southern Taiwan for both combat and rescue missions, the MOI said.

Meanwhile, the 15 Search and Rescue UH-60Ms will adopt the same paint scheme as the existing AS-365N Dauphin from the National Airborne Service Corps (NASC).

The helicopters are to be delivered to Taiwan in 10 consignments, with the final batch of three to be shipped in 2019.