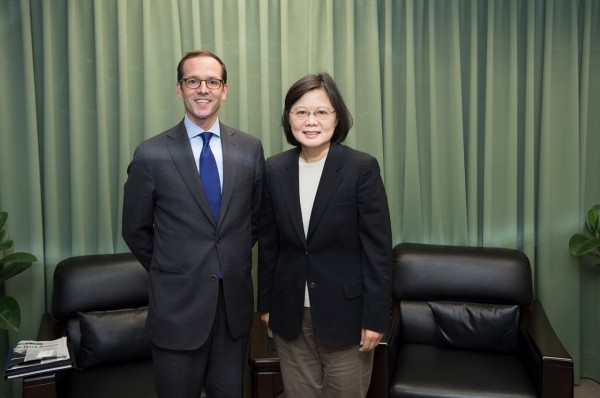 Now Managing Director and Practice Head for Asia of the Eurasia Group, a leading global political risk research and consulting firm, Medeiros arrived in Taiwan on Monday to receive the Order of the Brilliant Star with Special Grand Cordon in recognition of his contribution to the promotion of bilateral ties between Taiwan and the United States.

Meeting Tsai on Wednesday, Medeiros praised Tsai’s June speech which touched on maintaining the status quo with China as constructive. Tsai delivered the speech at the Center for Strategic and International Studies (CSIS) during her visit to Washington, D.C. in June.

He stressed that the U.S. welcomes the two leading parties in Taiwan to voice their opinions on joining the Trans-Pacific Partnership (TPP), saying he thought the TPP of crucial importance to Taiwan’s future economic development. He also expressed his expectation for the DPP to carry on policies that promote peaceful development of cross-strait relations.

Tsai welcomed Medeiros’s visit to Taiwan, and said that she expected to have more conversation and exchange in the future, according to a DPP press release. She added that, despite the DPP’s steady lead over its opponents, they will go all out in the last 30 days to grab more seats in the Legislative Yuan.

Tsai also reiterated that the DPP is committed to maintaining stable cross-strait relations, as Taiwan is in need of a peaceful environment to push for economic reform.