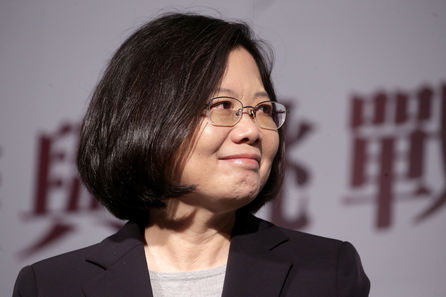 Democratic Progressive Party presidential candidate Tsai Ing-wen headed to Hsinchu Wednesday morning along with members of the party’s central standing committee on a campaign effort to rally for DPP caucus whip Ker Chien-ming as the elections approach the 30-day countdown.

Commenting on whether the speculations surrounding Tsai’s real-estate deals would impact her votes, DPP campaign director-general Su Jia-chyuan said they have already filed a defamation lawsuit against their Kuomintang accusers and that morale within the party is still high.

“As we close in on the election date, the confrontation will become fiercer,” Su said, adding that any abrupt changes will more or less affect votes.

The DPP expects to maintain 54 to 64 seats in the legislature, he said.

It was the second campaign event in which Tsai carried out outside of Taipei with members of the DPP standing committee following the rally in Taoyuan last week.

Members of the DPP caucus have come to an agreement to campaign for unendorsed candidates in 11 competitive districts (Taipei, Net Taipei, Taoyuan and Taichung), which include non-DPP legislative members such as People First Party candidate Vivian Huang and independent candidates Lee Ching-yuan and Yang Shih-chiu.

DPP Deputy Secretary-General Hung Yao-fu said campaigning for unendorsed candidates was necessary to keep the vote from being split in competitive districts, which would guarantee a KMT victory.

“Even in areas where the DPP has traditionally performed poorly, we still gained 30 percent in each district,” he said.

According to Yao, the party plans to stage another round of “piggy banks return home” event later this month in Taoyuan and New Taipei.