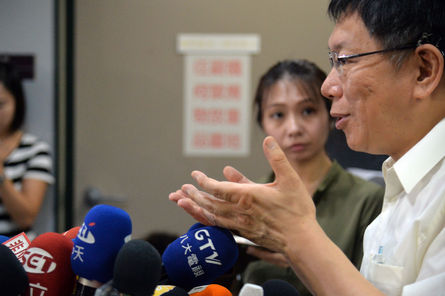 TAIPEI (Taiwan News) – The Taipei District Prosecutors Office questioned two members of staff at National Taiwan University as witnesses in the case of the special account set up by Taipei City Mayor Ko Wen-je, reports said Tuesday.
During last year’s mayoral election campaign, the Kuomintang accused the independent candidate of having set up a so-called “MG149” account which could be used for money laundering and other dubious financial practices. Ko, who worked as a surgeon at the NTU’s prestigious hospital, said the account was legal and helped young physicians and students fund their research.
On Tuesday afternoon, the prosecutors summoned two women employed at the hospital’s research and development department for questioning about the case, reports in the media said, naming the two as Lee and Yeh.
Lee was reportedly in charge of applications for research grants, correspondence about their approval or not, as well as changes in the plans and spending schedules. Yeh was involved with post-Ph.D. research and subsidy plans reaching outside the department, reports said. She also approved financial matters regarding salaries and severance pay, according to media reports.
During the previous phase of the investigation, prosecutors questioned key former Ko aide Liu Ju-yi about the general use of the account and about the income from speeches for NTU hospital doctors including the mayor.
Tuesday’s questioning was reportedly designed to compare Liu’s statements with those by Lee and Yeh, and to find whether the handling of the account had been conform to rules set up by the university and its hospital.
The MG149 account was one of several accusations leveled during the election campaign at Ko, who handily defeated his KMT opponent, Sean Lien, by about 57 percent to 41 percent.