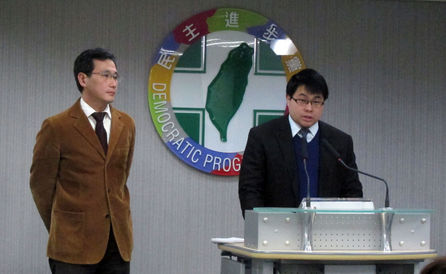 Tsai was reportedly upset over KMT’s repeated accusations that she was involved in real-estate speculation.

On Sunday, Tsai said the dispute was proven to be false and a lot of the remarks made by the ruling party have crossed the line, cautioning them to practice self-restraint before going too far.

“We plan to file a defamation lawsuit against Tsai, Wang and Chui Yi under Article 90 of the said Act later in the afternoon,” Huang said.

The three have accused Tsai of being involved in land speculation, as she purchased 15 plots in New Taipei City’s Neihu District in 1988 and sold them in 1997, allegedly making NT$180 million (US$5.5 million) in profit.

Last Friday, the DPP had presented official property registration records at a news conference, saying the KMT was wrong about the size, price and plot number, as well as the number of land owners.

“Their accusations were far-fetched and totally unfounded. Although the DPP wished to overlook such allegations, but they went too far this time,” Huang said.