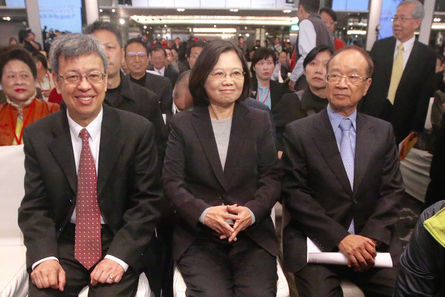 Democratic Progressive Party presidential candidate Tsai Ing-wen said she would come up with initiatives to help propel the nation’s biotechnology industry, citing her hope that the medical biotech sector could further develop and expand in the foreseeable future, reports said Monday.

Tsai’s comments came during her opening speech at a biotech forum in Taipei in the morning, where she was joined by her running mate, Chen Chien-jen.

“Chen’s expertise as an epidemiologist can greatly contribute to the development of Taiwan’s biotech industry,” she said, reiterating that it was one of the many reasons why she had chosen him to be her election partner.

Tsai pointed out that the goal is to help Taiwan become one of the world’s leading biotech supply chain nations with the likes of Switzerland, Belgium, Sweden, the Netherlands, the United States, and so forth.

“It’s an area where Taiwan can exert its full potential,” she said, adding the initiation could help create traction for industry players when the government plans its industrial policies by consolidating information and innovation gathered from the field.

New biotech pharmaceuticals and high-end medical equipment are two critical areas Taiwan can get into in the future, she said.

“Looking at the years ahead, the global biotech market will expand exponentially, and we definitely cannot be left on the sidelines."