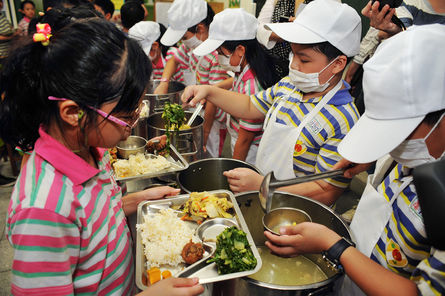 The Legislative Yuan on Monday passed an amendment to provisions of the Act Governing Food Safety and Sanitation that calls for the complete ban of non-organic produce and the processing of raw materials in school meals across the nation.

Democratic Progressive Party Legislator Lin Shu-fen pointed out after the third reading of the amendment that the effective ban will help minimize health risks as genetically modified (GM) products can pose a threat to children’s reproductive health.

Taiwan currently imports roughly over 2.3 million tons of soybeans each year, of which 90 percent are non organic.

Soybeans can be processed in a variety of ways. Common forms of soy include soy milk, tofu, textured vegetable protein (TVP, which is made into a wide variety of vegetarian foods – some of them intended to imitate meat), soybean oil, soy sauce, and many others.

A survey conducted by the Genetic Modification-Free Zone Alliance found that of the 20 or so types of vegetables provided in school meals in a five-day week, four to seven kinds are soybean products.

As the prevalence of GM foods continues to rise, Kuomintang Legislator Lu Hsiu-yen said the revised law will also require education authorities to work with local agricultural and health inspectors to regularly carry out safety food checks at least once every semester.

Decisions such as the assessment criteria or the number of schools inspected each time should be laid out through the combined effort of the Ministry of Education and local governments, according to the legislation.