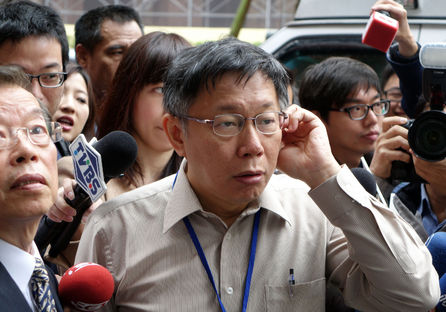 Ko looks for discourse of candidates

TAIPEI (Taiwan News) – Taipei City Mayor Ko Wen-je said Saturday he was still looking for the “discourse” to decide which legislative candidates to support in the capital.
In the campaign for the January 16 legislative elections, the Democratic Progressive Party has only nominated two of its own members for the eight legislative districts in Taipei City. In the six other seats, it is backing a wide variety of candidates from other parties or independents.
There have been reports that the DPP and Ko would like to see those candidates form an alliance, with names like “Capital Progress Alliance” or “Capital Change Alliance” being bandied about by the media.
On Saturday, Ko attended the official opening of the campaign headquarters of one of the independent candidates backed by the DPP, Lee Ching-yuan, at present a member of the Taipei City Council.
As the mayor, he had to consider which candidates held a positive attitude to helping effectuate changes in the capital, Ko told reporters. There was a need to look at the “discourse” of the candidates before making a choice whether or not to support him, according to the mayor.
The legislative contenders should begin by holding public hearings where they can present their views to the public, Ko said. He told reporters he was not campaigning for Lee, but only “expressing interest.”
The independent city councilor was expelled from the Kuomintang earlier this year, leading to some DPP voters reportedly being critical of the party leadership’s support for him. The other non-DPP candidates in Taipei City include another former KMT politician as well as members of the New Power Party, the Green Party-Social Democratic Party Alliance and the People First Party.