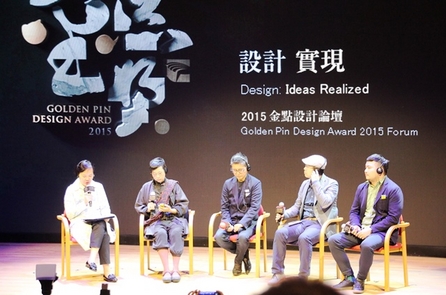 Golden Pin Award forum: designers should be practical and user-centered

In the morning, the Golden Pin Award forum invited 11 globally-recognized designers and creative entrepreneurs to share their stories of success. Under the theme “Design: Ideas realized,” they talked about the value of being a huaren designer, the impact of Chinese culture, and the rising power of Chinese creativity.

One of the speakers, Naoto Fukasawa, is a well-known Japanese industrial designer. His creation of minimal wall-mounted CD player for the Japanese retail company MUJI has been part of the permanent collection of the Museum of Modern Art (MoMA) in New York since 2005. Alongside designer Fukasawa, the forum also invited Vivian Cheng, Katsutoshi Ishibashi, Meili Liao, and other respected designers as well as culture and creative entrepreneurs to deliver speeches.

Winner of the Germany Red Dot Award, who is also the creative director of Vivian Design, Vivian Cheng has devoted herself to the industry for over 20 years. During her speech, she spoke of the history of Asian design, which was originated in a practical need, then lost in great wars, and finally found its way back.

“Designers should go back to the beginning and try to understand the needs of users,” Cheng added. Rather than abusive use of cultural elements in a design to reflect facets of certain cultural value, designers should bear "usefulness" in mind.

Page Tsou, a successful illustrator from Taichung, who has won over ten awards and prizes during his two years of study at Royal College of Art in the United Kingdom, agreed with Cheng. To successfully integrate Taiwanese cultural values into a design, he said, aesthetic perception is the key. “As a Taiwanese, my feelings for the land has already internalized, which is why I don’t intentionally put things with particular Taiwanese elements into my design.”

When asked the question, “what is the so-called Asian value or Taiwanese value?” Tsou lamented that compared to Japan or European countries, Taiwan’s design industry is marked with late start, and therefore it is too soon to pinpoint what a Taiwanese value is. The industry still needs more time and experience to grow, and more importantly, he said, “arts should not be valued through the lens of cost/performance ratio. It is important for Taiwanese to enhance the ability to appreciate arts, and to cultivate demand for the arts.”

The forum attracted a variety of people, many of them designers and creative entrepreneurs. In addition, the works of winners of the 2015 Golden Pin Design Mark will be on display in Taiwan Design Museum.