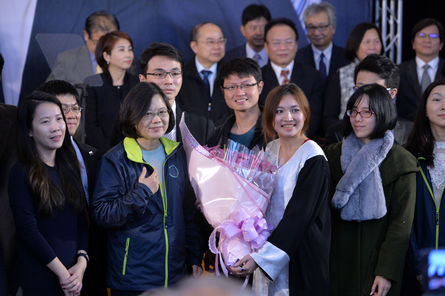 Democratic Progressive Party presidential candidate Tsai Ing-wen pledged on Thursday (December 10), which is also the International Human Rights Day and the 36th anniversary of the the Formosa Incident, to create an independent “national human rights commission“ to supervise the government’s human rights behavior.

In the future she would assume the responsibility to safeguard democracy and human rights for people of Taiwan and work with other political parties to push for constitutional reform, Tsai said in a Facebook posting.

She would strive for addition of advanced human rights content that is lacking in the current constitution, and push for more complete civil, political, economic, social and cultural rights, Tsai said.

She would transform the universal value of human rights into the new government’s governance foundation; and regardless of public officials or grassroots civil servants, their primary mission would be to assist in realization of human rights values, she said.

She would extend boundaries of the bill of rights from general protection to protection for different ethnic groups; place special values on conventions that protect designated groups, including women, children, the physically or mentally challenged, and foreign laborers; and work hard to eliminate existing prejudices, Tsai said.

Tsai pledged to create the independent "national human rights commission" to prevent grave human rights violations from happening. The commission would be free of any political interferences, she added.