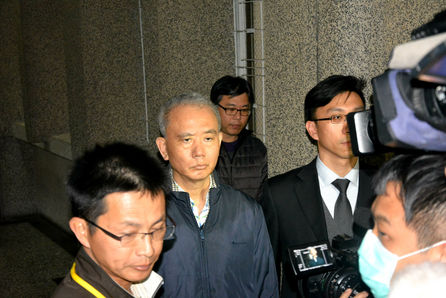 During a press conference in the morning, prosecutors provided a debriefing of its 140-page appeal, citing discrepancies and irregularities found in Ting Hsin’s alleged role in the food safety scandals last year.

Prosecutors said they found evidence to support that the raw materials for oil imported from Vietnam contained toxic heavy metal residues which are harmful for human consumption.

About a year ago, the public was outraged as it was discovered that various types of cooking oil had been adulterated with a range of products which should not be served to humans, including waste and industrial products. Ting Hsin, a multinational group led by the four Wei brothers, was accused of being at the core of the scandal.

At the time, Vietnam's Ministry of Trade and Industry confirmed to prosecutors that the oil inspected by Vinacontrol Co., a private certification company in Vietnam, was only for use in animal feed oil and not for human consumption.

But Ting Hsin Oil & Fat, the company that bought the oil, declared to customs that the oil was fit for human consumption, backed by a Vinacontrol export certificate stating exactly that.

The Changhua prosecutors, who then brought former Ting Hsin International chairman Wei Ying-chung and six other defendants to court in November, failed to win the case with the judges after charging Wei for falsifying the content of ingredients, and for serving animal-feed to consumers.

However, the defendants were acquitted as the Changhua judges ruled that evidence to support the harmful claim were not justified.

“This time we come with more evidence to support our charges,” prosecutors told reporters in the morning, citing nine major discrepancies as follows:

1. Dai Hanh Phuc Co., Ting Hsin’s raw material supplier, did not have a registered edible food supplier certificate from the Vietnamese government.
2. Dai Hanh Phuc was confirmed as having exported their produce to Taiwan for non-human consumption.
3. The raw materials used by Dai Hanh Phuc Co. to make their animal feed oil came from unknown sources. The documents which it provided to authorities suggested “Huan An Plant” as its main outsourcer, but after investigation the latter did not exist.
4. Dai Hanh Phuc is a certified animal feed oil supplier whose produce is mainly used as animal feed.
5. There are discrepancies in the Vinacontrol inspection report.
6. Ting Hsin knew prior to purchasing the animal-feed oil from Dai Hanh Phuc that the content of the Vinacontrol report provided by the latter was falsified.
7. The animal feed oil made by Dai Hanh Phuc contained excessive acid value (AV). However, Ting Hsin knowingly processed the oil and sold them for human consumption.
8. Ting Hsin is in violation for falsifying and forging their vegetable cooking oil when they tainted it with animal feed, which contained toxic heavy metal residues harmful for human consumption.
9. The court purposely sidestepped the discrepancies as evidenced in the Vinacontrol report, including the fact that Ting Hsin used expired oil for processing.