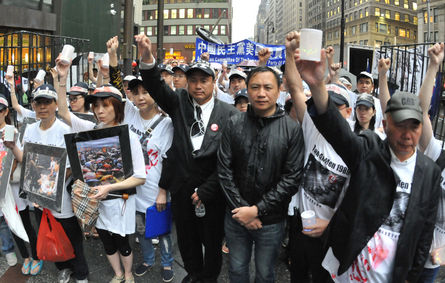 Exiled Chinese democracy activist Wang Dan, who was a former student leader in the Tiananmen Square protests of 1989, slammed President Ma Ying-jeou Thursday for not honoring democracy and human rights as he so often touted.

Wang wrote on his Facebook page criticizing Ma for the 80-second handshake with Chinese President Xi Jinping during the Ma-Xi Summit in November.

“Doesn’t Ma know that he shook the hand of a person who quashes democracy and human rights in China…who alone ordered the prosecution of more than 200 rights lawyers in a single day back in January?” Wang wrote.

The Chinese activist also panned Ma for stooping so low in order to realize his own personal agenda by heralding the so-called “historic” meeting in Singapore.

“Creating a stable and peaceful relation across the strait is important, but so is pride and dignity,” he lamented, adding that “Ma sold his conscience for money.”

Wang also complained that Ma never once handed a human rights award to any of the Chinese dissidents, who now continue to face threats and harassment from Beijing, even to those that managed to take refuge outside of China.

“It’s a complete disgrace and an embarrassment for the Taiwanese!”

Commentators on Wang’s Facebook page also blasted Ma for being “Beijing’s lapdog” and for kowtowing to Xi’s demands.

Wang, who taught cross-strait history at Taiwan's National Chengchi University from 2009 to 2010, was a staunch supporter of the prominent Sunflower movement last year.