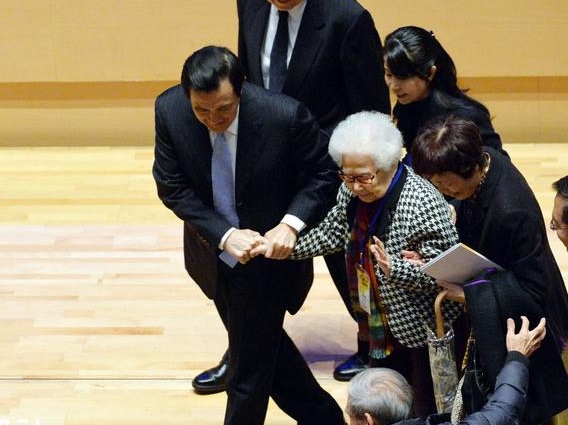 President Ma Ying-jeou was met with strong protests from human rights activists outside the Far Eastern Plaza Hotel in Taipei as he presided over an award ceremony organized by the Taiwan Foundation for Democracy Thursday morning.

Sunita Danuwar was awarded with the 2015 Asia Democracy and Human Rights Award for her role as a leading social activist in Nepal. Once a victim of human trafficking, Danuwar is the founding member and chairperson of Shakti Samuha, the first non-governmental organization sheltering human trafficking survivors in Nepal.

Both local and Hong Kong activists staged their protests against the government for repatriating four Chinese dissidents who sought political asylum in Taiwan earlier this year.

“The deportation of Chinese dissidents seeking asylum was a direct violation of international human rights conventions,” protestors shouted outside the hotel.

The activists had urged Ma’s government not to deport them to China, where they might face severe punishment, including torture and lengthy jail terms. Apathetic over their plea, the government however expedited the procedure to have them deported in September, citing the dissidents were suspected for spying and had broken visa regulations.

Wang Rui, Su Qianlong, Lu Ning and Shi Jian were charged with violating the Immigration Act and acting as accomplices to criminal activities, including espionage.

Su, Lu and Shi took a motorboat from China’s Fujian Province across the Taiwan Strait, and landed on a rocky beach in Taoyuan’s Dayuan District on September 10, allegedly to pick up Wang and his girlfriend, Yang Luo, who had overstayed their visas and were residing at an apartment in Taipei.

Hundreds of police barricaded the perimeter of the hotel as Ma staged the awarding ceremony at the hotel in the morning.