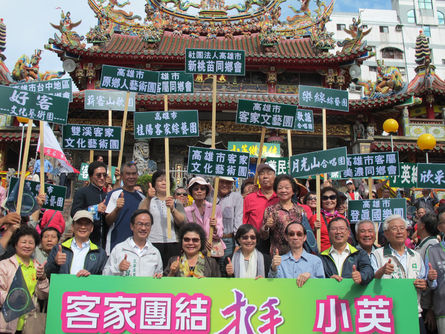 The temple is regarded as the center of Hakka spirit and belief in Taiwan.

Chen was joined in the rally by Hakka leaders such as Tsai’s Hakka fan club chairwoman Yeh Chu-lan and temple director Ho Nuan-hsuan.

According to Hakka Affairs Council statistics, Kaohsiung City, which has been under DPP’s rule since 1998, has about 320,000 Hakkas, with Sanmin District’s approximately 68,000 Hakkas being the most followed by Meinong District’s 41,000.

The Kaohisung City Government has long been looking after Hakkas’ rights and benefits, and has done a lot to preserve Hakka culture and win over construction projects, Chen said.

If elected president, Tsai will listen to Hakka people’s voice and direct more resources to them, Chen said.

Yeh said that she could feel Hakka folks’ enthusiasm and urged them to support Tsai, who also has Hakka blood.

Ho, who brought 29 temple directors and supervisors to the rally, called for all Hakka people to support Tsai and DPP legislative candidates in the upcoming general election.